By Jillian on October 4, 2017 in Cycling Central Otago

Hail for a change, this spring morning. A friend rings and I leave the fire when the sky quietens and go outside to weed the lavender and bulbs while I talk to her. We discuss the coming protest about the big irrigation schemes in Canterbury. She’s unable to go; I will go for both of us. And now that the sun is flickering to come out, we decide rather than talking about our concerns, the best thing we can do is go for a bike ride (though we’re 150 kms apart).

Bartali and I head up the valley. The low hills and the Hawkduns are in shade, but Mt Ida stands shining, an unearthly sight on a dull day, the ‘wind fierce out of the west’.

We strike the full force of the wind going up Lockhart’s Hill.

“Are you there?” Bartali checks on me. Baaaaaaa, fifty or so sheep call back.

In summer, the sheep are tawny brown in tawny brown fields, and now, the day after shearing, they’re like a rinso ad – bright white sheep on green grass.

Near Dunedin, there are lambs cavorting in the paddocks, willows sheened with green and old plum trees beside the road frothed with white. But here winter has barely lifted. No lambs yet – they’ll be late September at least. The willows and the poplars bare. Only the lucerne and the grass know its spring.

“Another nice little pinch,” Bartali says, as we go up the second hill.

“I call it Hills Creek Rise,” Bartali says. “It’s really the saddle between the two valleys, the Ida Valley and the Manuherikia.”

Whatever its called, the wind is strong. On the way back I stop there to take a photo of bales of lucerne, plenty of feed left yet for stock. A gust of wind nearly blows me off my bike.
Coming home down the valley, there’s a cross wind..

“This is where riders will drop people in a race,” Bartali says. “If you can’t handle a cross wind you’re out the back. And riders won’t put up with people sheltering if they’re not going to take a turn. Otherwise they could come out at the end with a sprint and win the race.”

I shelter most of the way up the valley, tucked into Bartali’s left side. The sprint is on at the end. I give it everything. Sparrows burst out of the tall yarrow, bouncing and lifting ahead of us, like blimps in the wind. 39km/37km. Bartali wins. 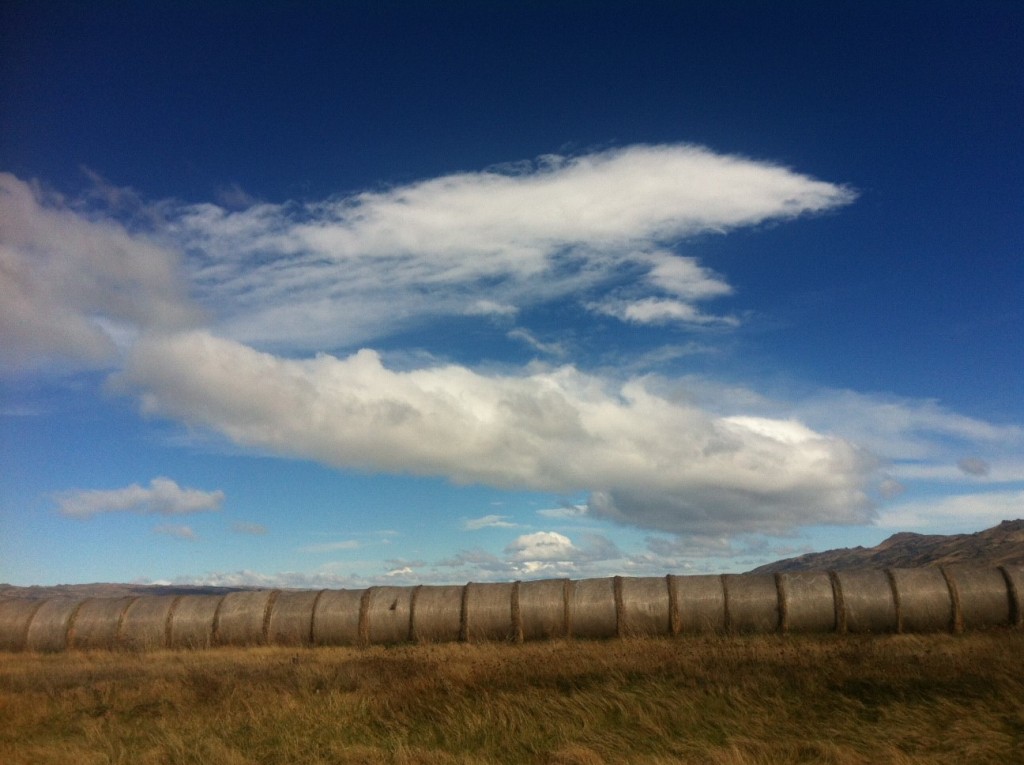