By Jillian on June 5, 2018 in Cycling Central Otago 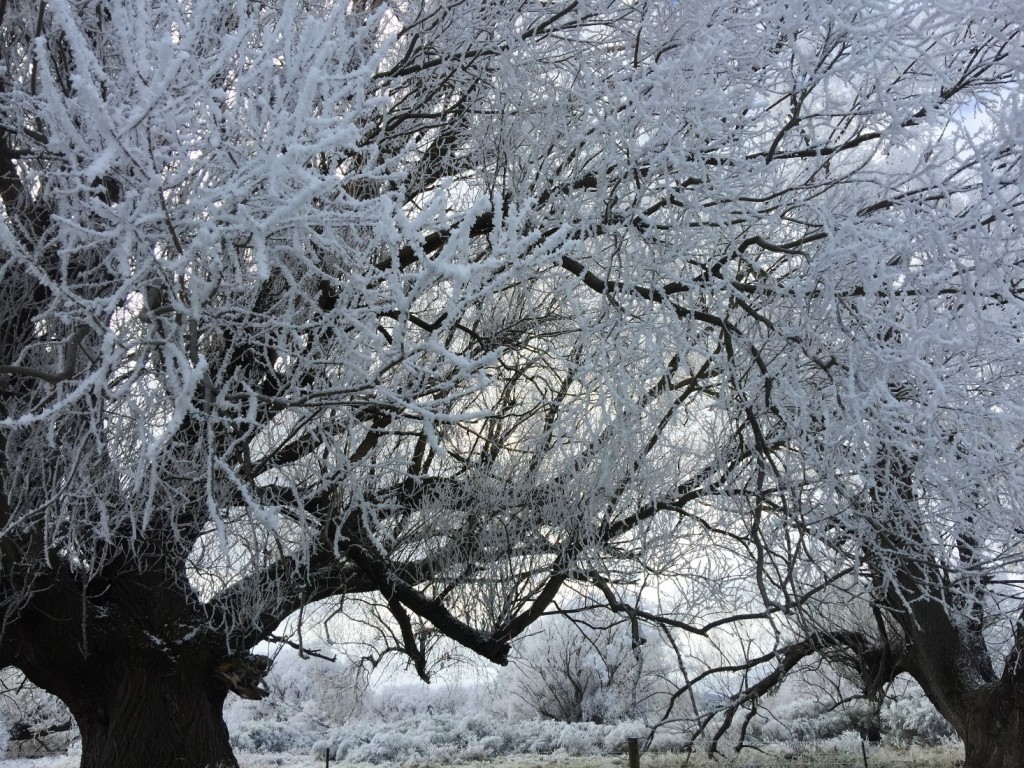 It’s possibly the coldest day in the valley and Bartali and I are of one accord. We need to cycle through the hoar frost. Otherwise how would we know how it felt? Actually, that might be my reason; Bartali wants to keep training, frost or no frost. We head up the valley, where the iced willows line the Ida Burn and for once broom is a beautiful sight. The frozen yarrow looks like ice sculptures along the verges.

Everywhere is monochrome grey, or black or white, unless something of colour is placed in the landscape, like the lime green, plastic covered rolls of Lucerne baleage across the paddocks, or a yellow road sign.

I wondered how it would feel cycling in this weather. To breathe, I found out, is like sniffing chilled vodka straight up my nose. It hurts. I cheat by breathing through my mouth, which is covered in Bartali’s red merino balaclava. He didn’t wear one, he said he managed out training the other day ok. But today is harder. His fingers, in one pair of gloves, are ‘screaming’ he says. At least he has newspaper down his chest. I wore a homespun jersey instead, as an experiment. Even this the chilled wind enters. But I have two pairs of gloves.

We’re riding to the top of Blackstone Hill where a neighbour has told us there are pine trees felled by the historic school building. The locals know we forage for firewood. Farmers let us chainsaw fallen willows. Not often there’s pine to be had, though. 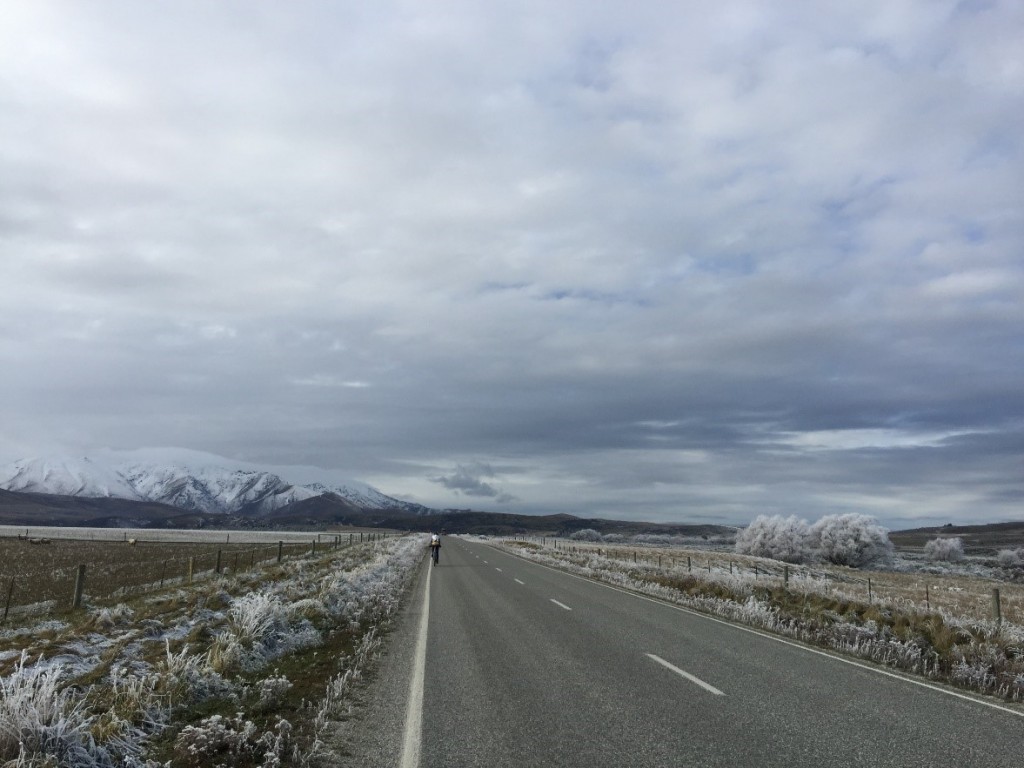 Up Lockhart’s Hill the breathing is easier. The fences are no longer latticed ice. The grass is tawny gold. The pines are green.
“Perhaps this hill was above the inversion layer,” Bartali says. Behind us, the fog is unfolding along the Ida Valley.

The old Blackstone Hill school was once hidden in a forest of trees. Now it’s safe from falling limbs, a small, abandoned building on a wide hill. The pine logs are a treasure trove. Indeed, on the way home, back into Ida Valley and the white breath of fog, we meet the neighbour, Peter, in his truck with chainsaw. He thinks we’re mad, but not long after we get home, he arrives at Bartali’s with a load of fresh sawn pine. 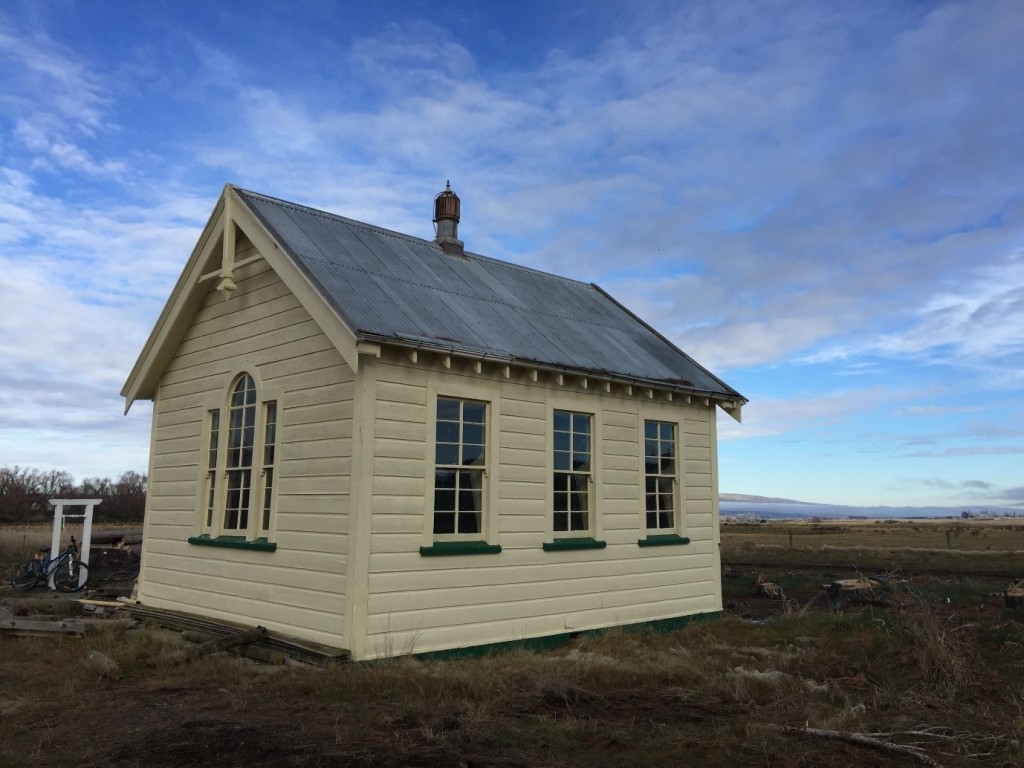 No frost here at Blackstone Hill School. In the background is the inversion layer of fog over the Ida valley.

In the meantime, we still have to get home. My gear won’t change, but we decide its too cold to stop and fiddle with it. We head home into the wind, past a farmer’s frozen pond and the stream running into still and white as well. Past sheep nonchalantly grazing in the iced grass, past our friends’ houses with their beautiful iced fruit trees and birches, and home, where a magnificent white crabapple arches over the stone wall. 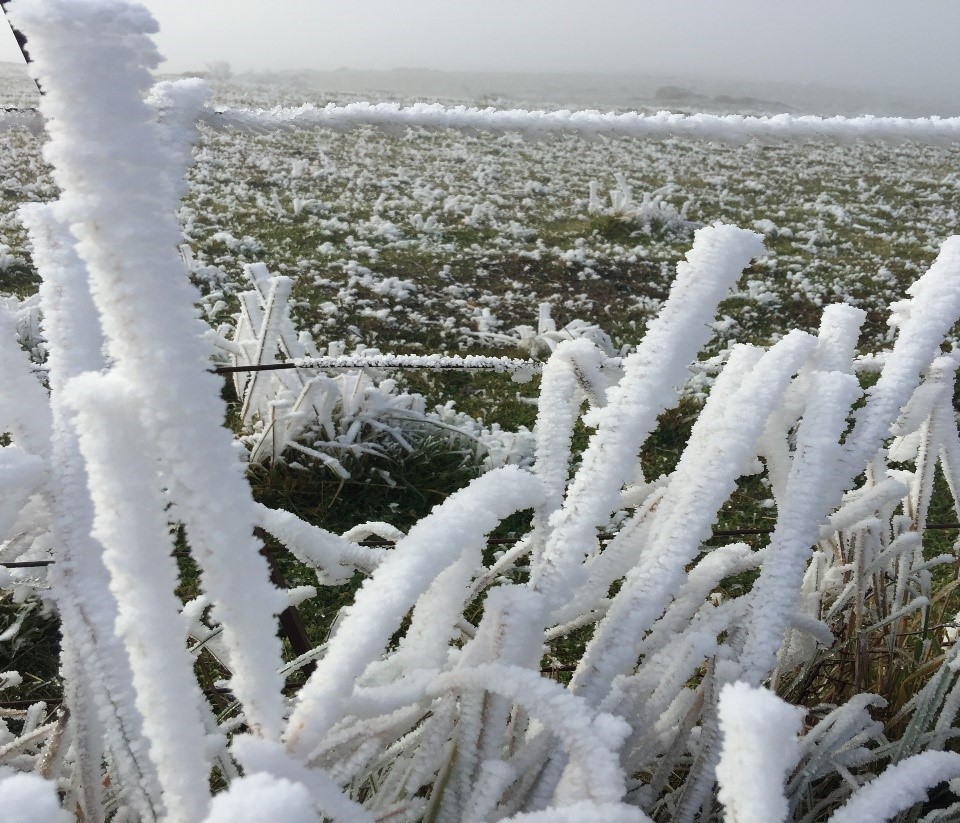