By Jillian on August 23, 2017 in Cycling Central Otago

Snow is forecast down to 600 metres this afternoon. We’re at 540 metres so the hills around the valley will most likely get a good dusting. In preparation I put on two pairs of gloves and push a folded newspaper down the front of my jacket for wind chill. There’s a slight breeze. Nothing like the north-west gale of last night.

I woke up this morning to find my verandah chairs upended in various places on the lawn, joined by the rake, the broom and one gumboot. Though the cane armchair I’d left by the pond, and was last seen swooping along upright on the flood across my paddock, Contador retrieved yesterday from a fence line further down, slightly worse for wear, and placed in the shelter of trees. 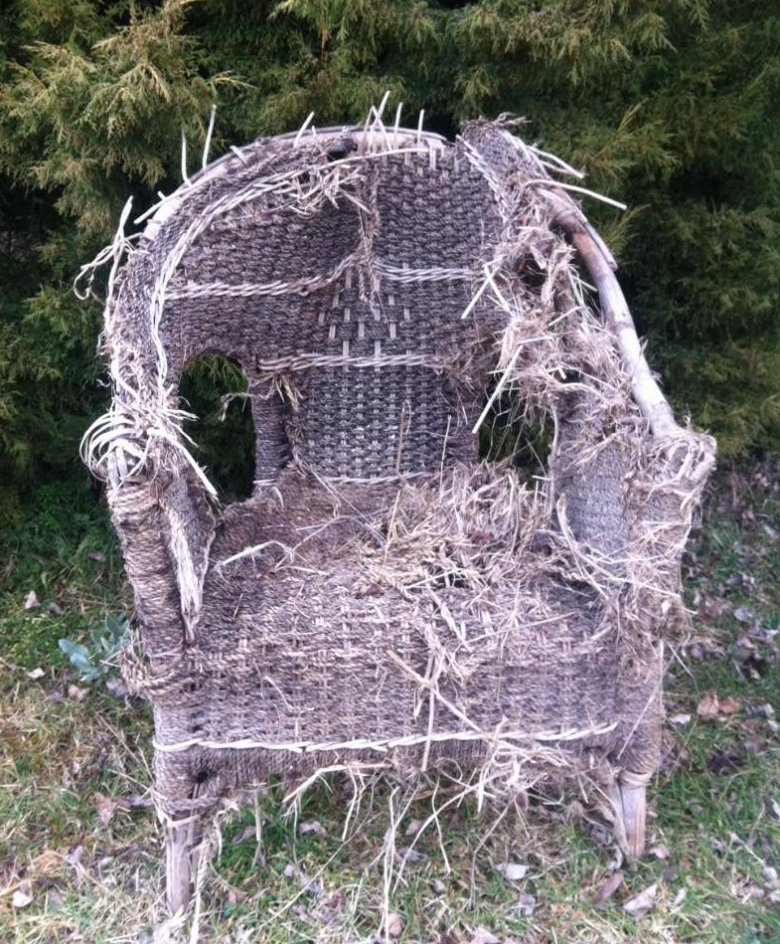 He left left earlier than me to cycle and as I head up the valley with no sight of him I wonder if I’d listened to instructions properly – up the valley or down the valley, or was he already up and back and I’d missed him? I chug on, the bike seeming to move effortlessly compared to the last outing.

Have I become fit that quick? For a few minutes I bask in the wonder of this, until I realize that north-west wind is on my tail. Like the way luck, or the opportunities you’re born into can make the road ahead so much easier. Today, the same distance, the same rise to the road as the last ride, but doing so much better with the wind at my back not coming at me sideways.

Ah but here’s Contador, swooping up over the bridge ahead and slowing down to join me.

I remember to say my cyclist’s prayer. May I be blessed and protected and my bike too (that’s to cover various contingencies like turning in gravel and forgetting to pull my foot out before the bike slides over, or in case heavy trucks or speeding cars come too close,) and then one for Contador and his bike (to cover such things as me running into the back of his wheel) and for all people, traffic and creatures around us (to cover low flying hawks, straying sheep and the aforementioned trucks and overtaking cars).

When Contador turns right at the T intersection at the top of the valley, I’m pleased. At midnight, driving home from my day job as nurse aid at the Maniototo Hospital, I’d recalled the joy of swooping home along the steep road from Wedderburn. But first, the hills. Or ‘gnarly little bastards’, as Contador calls them. “Though what I like about this ride,” he says, “is that it’s always a good measure of your fitness. You go in front and set the pace,” and I move up, already starting to huff like a train. 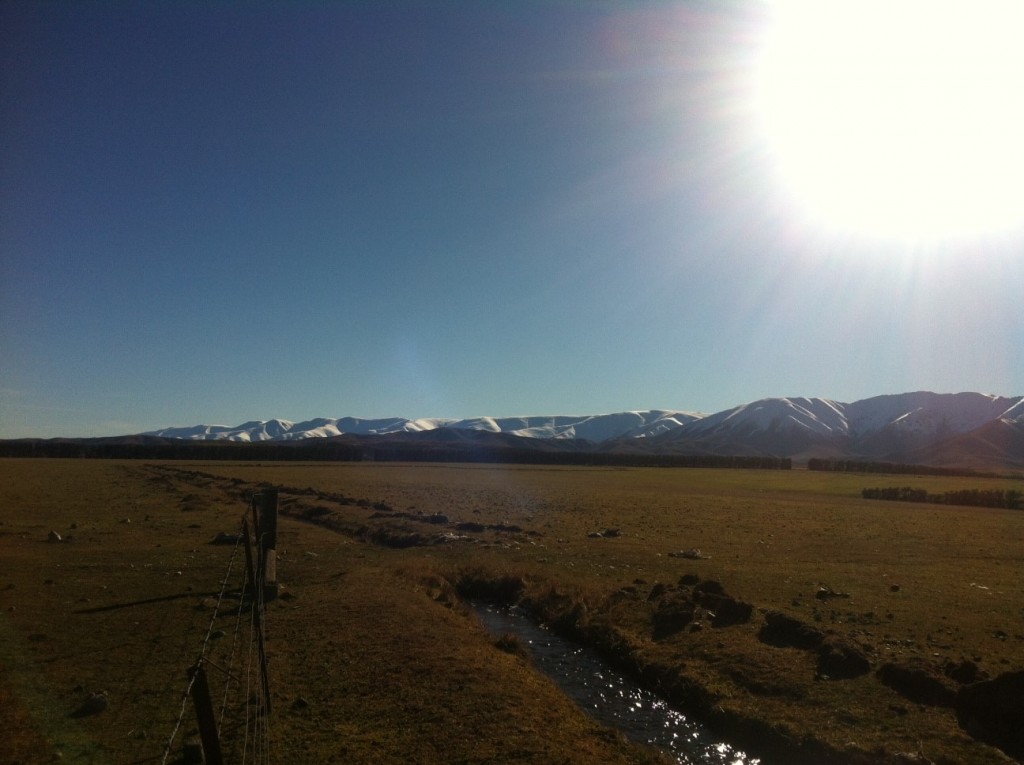 Water race beside the road on the way to Wedderburn

At the top he tells me, “You need to change into your lowest chain ring when you’re still part way up your sprockets. Don’t leave it till you’re in the lowest sprocket and still in your middle gear. It’s too big an angle. You could throw your derailer into your spokes.”

The next hill I take his advice. It’s a good feeling going confidently into that low gear. I feel like I’ve got some control over the situation. In the past, I’ve stayed in my middle gear as long as possible, feeling guilty about going into the low gear, as if I’m not trying hard enough. But now I’m going to embrace the low gear.

In a long paddock sloping up towards the Hawkduns, sheep have their heads down eating hay that’s spread in a circle. Hay, not sileage, for there’s no sharp tang in the air. Everywhere here the paddocks are cropped short; tawny and slick after frosts and ice. The sheep don’t even lift their heads to consider us.

Across the road there’s nothing happening at Becker’s woolshed. But Barry has passed us three times in his truck, a black and white dog on the back running from side to side as if there’s an exciting job coming up the moment he can leap off the deck.

We pass Wedderburn and instead of turning back, Contador heads on towards one of the steepest hills in the district. My nemesis.

“Go into your low gear about a third of the way up,” he calls back. It’s a long, slow grind. I start wishing I’d done yoga breathing exercises for the past year. Anything that helped my ribs expand, so my lungs didn’t feel like they were prisoned by bone.

Ahead of me, Contador is warmly decked out in Garmin gear – perhaps used for training for the Tour de France. Cyclist Julian Dean (who rode the Tour seven times) often sends down his sponsored gear, like care packages to the south.

“You look professional,” I call to Contador.

“Have you got newspaper down your front?”

On the long, joyous, downhill ride home, the sun breaks through the leaden clouds over the Dunstans. I stay in Contador’s lee and keep up my speed by concentrating on the distance between our wheels. The sun shines on his wheel rim and the heel of his cycling shoes. We charge into the village. The speed panel is up – 33 km we’re doing, and a ride of an hour and twenty minutes.

My old shoes are hanging in a bag on my gatepost, ready for the walk with the bike through the slushy paddock to home. Contador rides on up the street.

“Good riding,” he calls back to me. 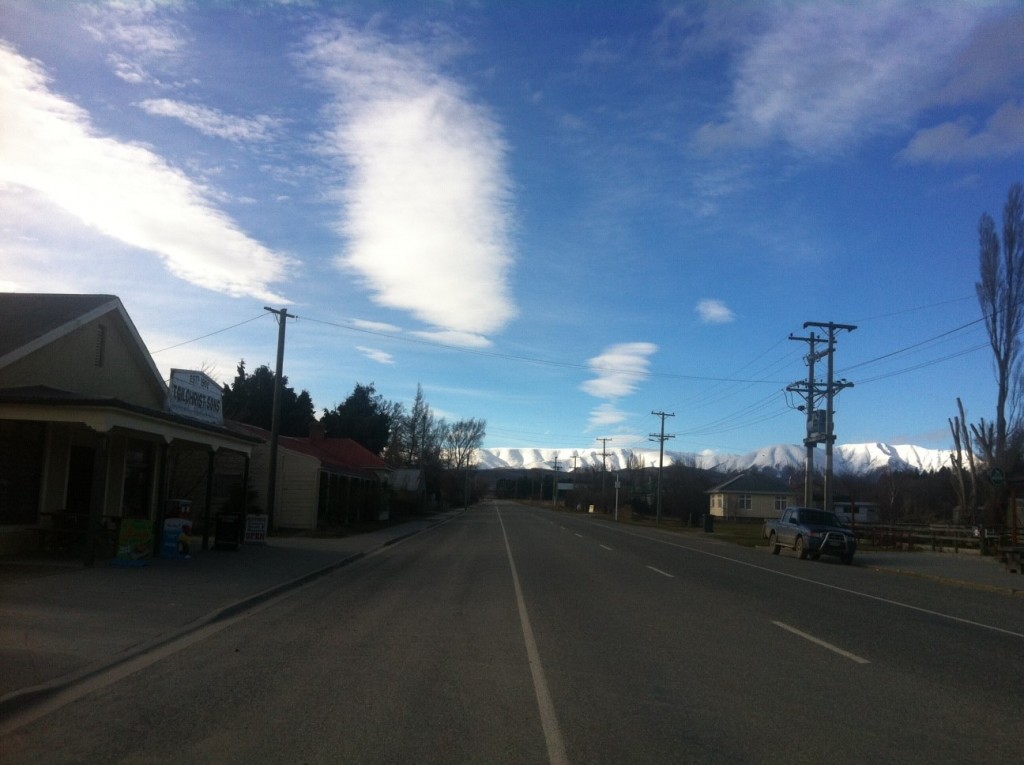 Coming into the village with the speed camera