By Jillian on September 21, 2017 in Cycling Central Otago

This morning frost, and yet, beyond the silver sheen of grass and tussocks, a line of eight cyclists. The first group of riders on the rail trail for this coming season. Later in the day, the cyclists safely at their destination, the wind comes up strongly from the north west. The long grasses on the side of the road bend over from the force of it. Later still, the wind slightly dropped, Bartali texts – A wee ride?

Mostly I’m not the one to text that. Mostly my motivation is at the lower end of the scale. And yet, it’s a gift when someone else encourages you to exercise. As much as I can, I say yes, even if I don’t feel like it. Who does feel like biking uphill into a head wind? My rule to myself, while I’m so unfit, is to respond positively. And not to moan on the ride, or even ask when are we turning, but to suck everything up and keep pedaling circles.

We turn a few times on the road – up the valley or down the valley to ride?, and settle on Lockhart’s Hill, uphill into that headwind. Sheep either side of the road, a lot of low cloud skudding along, the sun deep behind a cloud and in a burst of sunshine, the new gravel over the repaired road section glints like splintered glass. Perhaps schist flakes, Bartali thinks.

On this ride, either I’m fitter, or Bartali is riding more slowly, but I manage to keep up with him all the way to the top. “Good riding,” he tells me as we cruise over the hump. We go past the bridge where they sheep had mobbed last ride, and past the old stone house on the corner of Hills Creek Road. The wind is relentless. Being under- dressed for the cold doesn’t help either, though I do have newspaper down my chest.

The sun glows on the slopes of the Home Hills and the Hawkduns below the snow line. I think of lines from neighbour Brian Turner’s poem Place, “the light is like honey/ on the stems of tussock grass/ and the shadows/ are mauve birthmarks/ on the hills.” I watch the hills as I ride.

The ‘wee ride’ is an hour. A good work out. I can feel the strength returning to my body. We’re not going long distances or high speeds, but there is a difference, a determination perhaps, returning. And to test it, I pull out past Bartali on the home straight into the village, pumping my legs, watching the number on the speed board turn over to 36kmph. Over to the west the clouds begin to glow, long forms of pink, and gold. 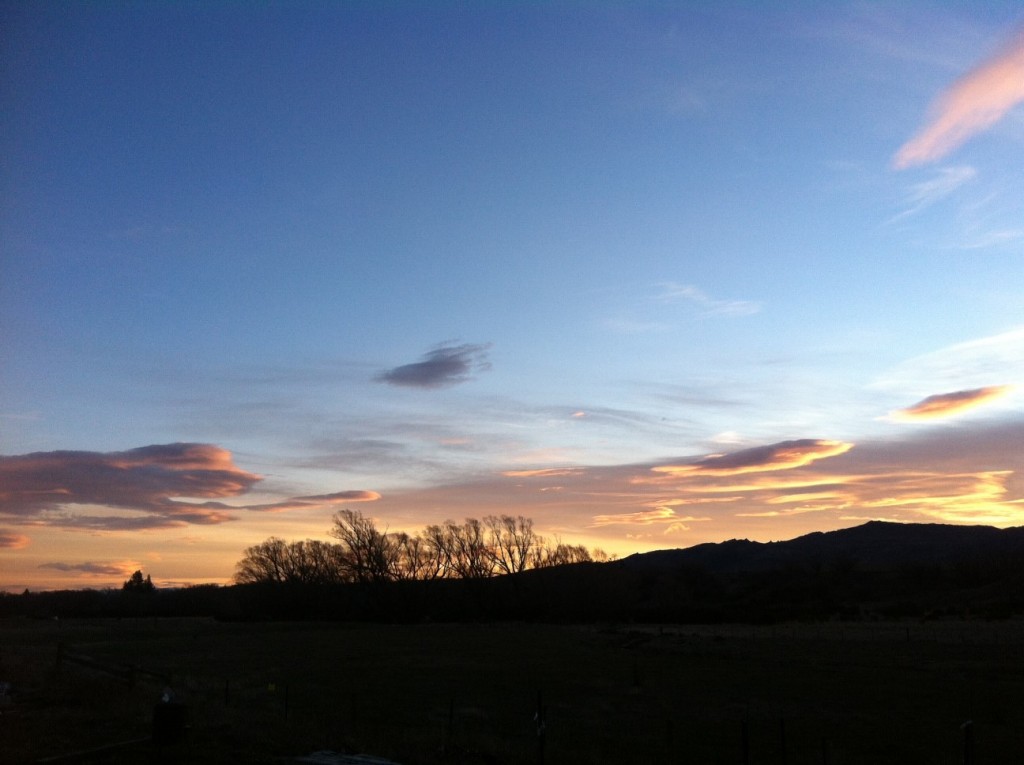